Pioneers Who Forged the Path in Sensory and Consumer Research 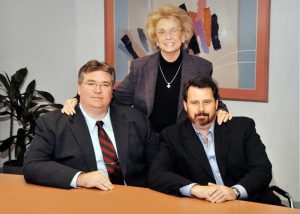 Long before they founded their company, David R. Peryam, Ph.D., and Beverley J. Kroll, BS, MA, were laying the groundwork for the science of consumer testing. The two were pioneers in the sensory field and their research development work for the government and private institutions helped shape the current practice of consumer product research.

Dave and Bev established P&K Research in 1957 to provide sensory research services to industry. From the start, they were dedicated to helping their commercial clients grow their businesses by providing actionable consumer understanding gained through innovative research methods, superior study design, flawless field execution, and insightful analysis and interpretation.

A highly trained researcher as well as experienced corporate manager, Jeff has played a key role in the development of many of P&K’s information technology innovations since joining the company in 1982.

Dan has played a key role in developing P&K’s tester database and managing the expansion of P&K’s extensive testing facilities. He honed his skills as a sensory scientist under the tutelage of Dr. David Peryam, the acknowledged Father of Sensory Science.

A behavioral scientist, Bev was internationally recognized as an expert in consumer product testing. She was among the first to apply sensory and consumer testing methods to new product development. Her collaboration with Dr. David Peryam at the Food and Container Institute for the U.S. Army set forth the foundation for many of today’s methods and practices utilized in new product research. Bev passed in January 2021, last serving as Chairman of the Board.

Awards in Honor of David Peryam and Beverley Kroll

In honor of Beverley Kroll, the Society of Sensory Professionals bestows the award for Outstanding Presentation that Develops or Expands a Method to a student at its biyearly conference.

How can we partner with you to help you create your best products?

Click here for our COVID Health and Safety Protocols.

Let us know by filling out the form below: